The Barry Lopez Foundation for Art & Environment was inspired by his belief in the singular ability of the visual arts, literature, and music to communicate the imminent catastrophe posed by climate change. How do we imagine places we have never seen in person, or global transformations too vast to imagine or imperceptible to the naked eye? How do we make meaning of the waves of apocalyptic news that greets us on a daily basis? Barry Lopez believed that the arts could create a tangible connection to the world around us while offering transformative experiences of solace, hope, and understanding. The photographer Robert Adams, a friend of Lopez’s, wrote of this in his book, Art Can Help:

It is the responsibility of artists to pay attention to the world, pleasant or otherwise, and to help us live respectfully within it. Artists do this by keeping their curiosity and moral sense alive, and by sharing with us their gift for metaphor. Often this means finding similarities between observable fact and inner experience—between birds in a vacant lot, say, and an intuition worthy of Genesis. More than anything else, beauty is what distinguishes art. Beauty is never less than a mystery, but it has within it a promise. In this way, art encourages us to gratitude and engagement, and is of both personal and civic consequence.

Environmental consciousness and affection for the land have been persistent themes throughout the history of American art. The landforms of North America and its sense of unbounded wilderness have shaped us as individuals and as a nation. The artworks below consider our relationship with the landscape from the nineteenth century to the present day and how it in turn reflects our own aspirations and desires. 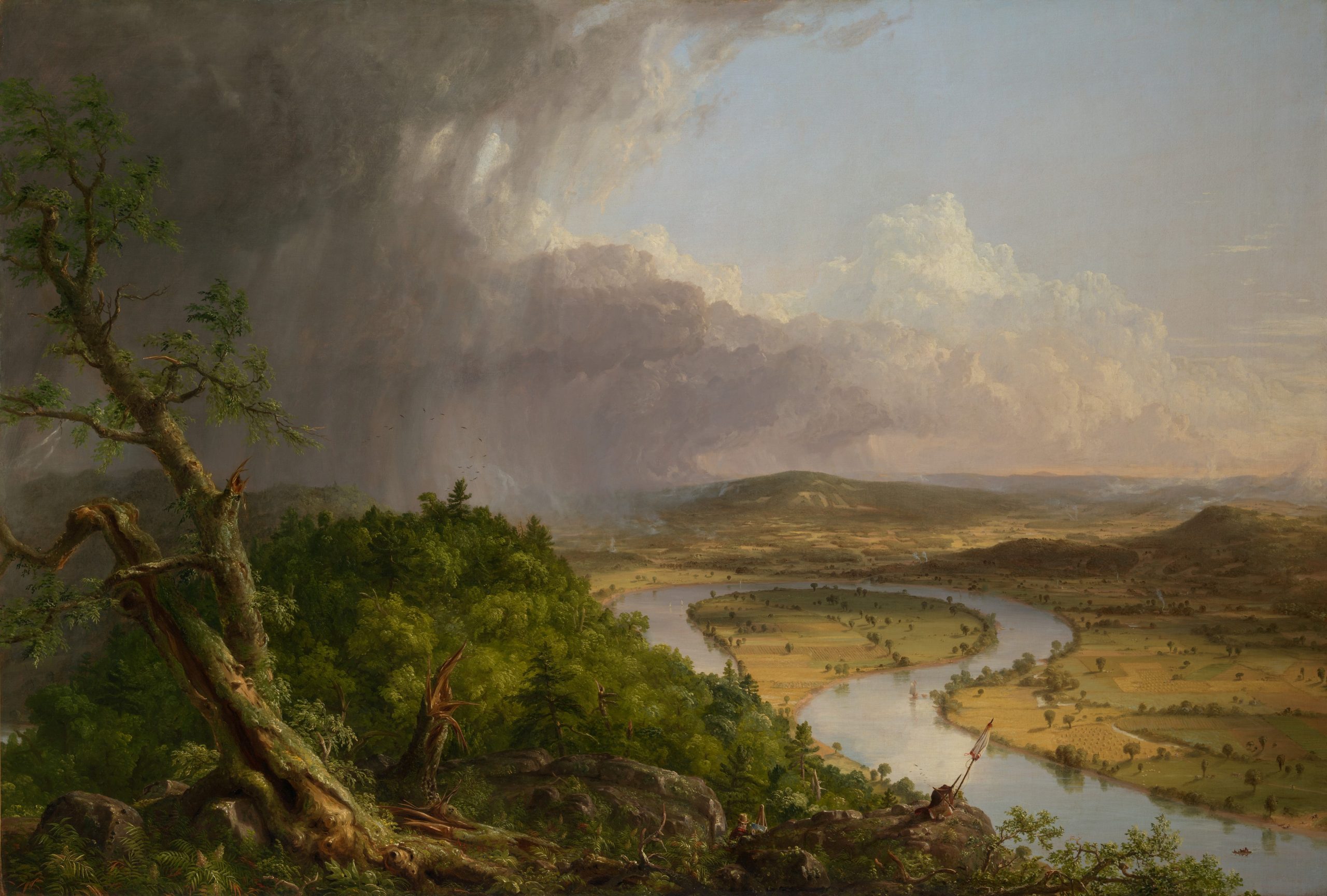 Thomas Cole is recognized as the greatest American landscape painter of his generation and the first proto-environmental artist in the United States. Born in Britain, Cole was an economic migrant in the age of the Industrial Revolution who arrived on American soil in 1818. His early depictions of the Hudson River valley introduced a vivid, dramatic style to American art.  Anxious to develop as an artist, he returned to Europe between 1829 and 1832, visiting England and Italy.  In London, he examined museum collections and met the leading landscape painters of the day, J. M. W. Turner and John Constable.  In Italy, he sketched landscapes graced by Roman ruins and studied figure drawing.  On his return to the United States, Cole embarked on his most ambitious paintings, The Course of Empire (1836; New-York Historical Society) and The Oxbow, 1836.  These works respond to his European experiences while also expressing his abiding passion for the American wilderness. The artist addressed the dangers the young nation faced under the expansionist policies of President Andrew Jackson, which led to drastic ecological, social, and economic change.  Horrified by the effects of industrialization on the landscape, Cole sent an impassioned visual warning in his paintings to “dollar-godded utilitarians” about the harsh ecological cost of unchecked development. By the time of Cole’s early death in 1848, landscape painting had become what one critic called “a national art in the New World.” 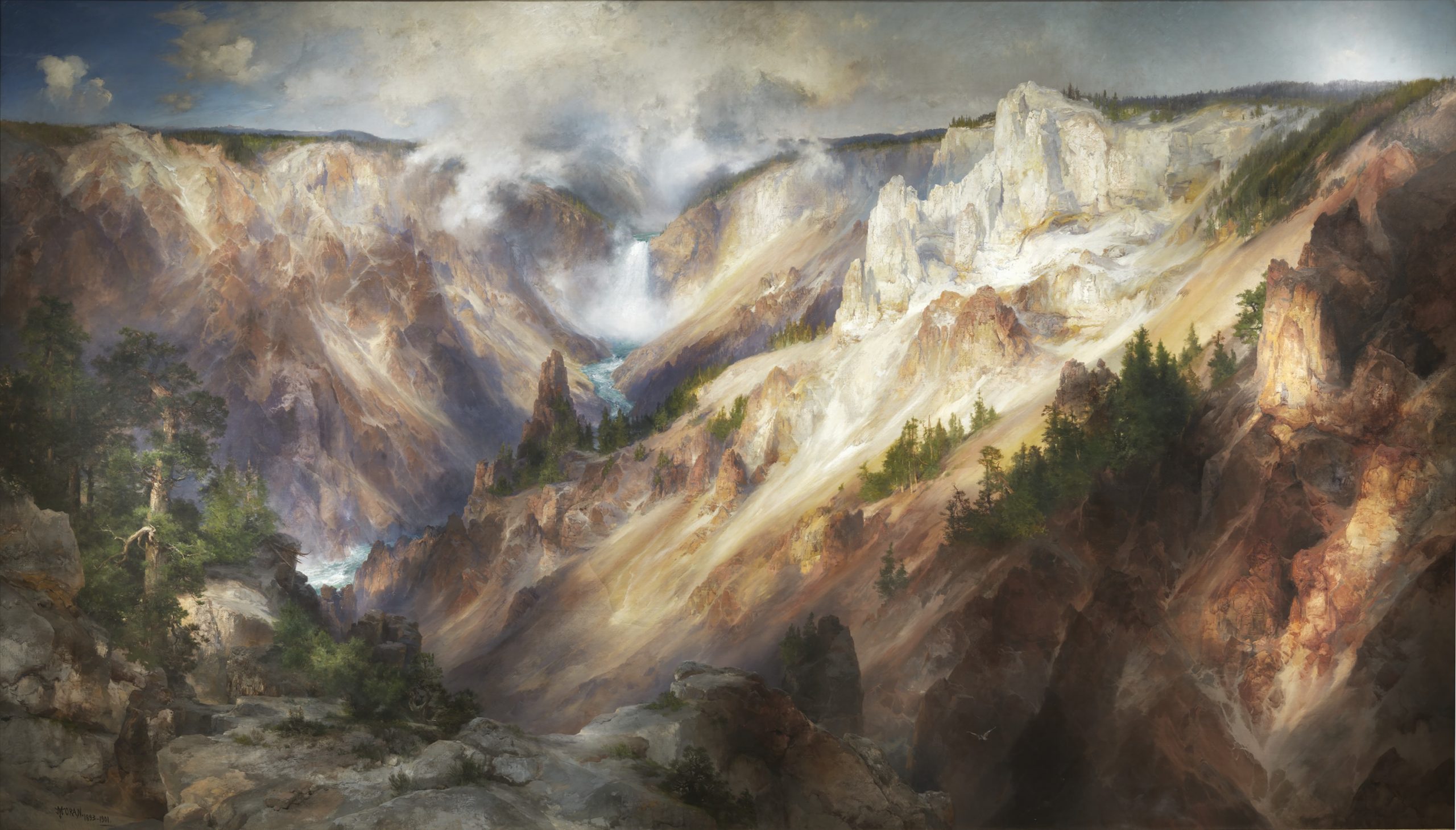 Born in England in 1837, Thomas Moran emigrated to the United States with his family when he was a child. Beginning his career as an engraver, Moran was hired in 1871 to rework two sketches of the Yellowstone region for an article in Scribner’s Monthly magazine. This simple commission proved a turning point—enthralled by the landscape, Moran joined Ferdinand Vandeveer Hayden’s 1871 Geological and Geographical Survey of the Territories, intending to make watercolors and sketches for later paintings. Earlier visitors had described the Yellowstone region as a hellish landscape of smoking geysers and boiling springs, but Moran found brilliant, energetic colors and majestic vistas. He catapulted to fame the following year when Congress purchased his first monumental painting, The Grand Canyon of the Yellowstone, to hang in the Capitol in Washington, D.C.—the first landscape painting acquired by the federal government.

Yellowstone’s reinvention as a natural wonderland was the result of intense lobbying by Northern Pacific Railroad and business interests who wished to see the area developed as a tourist attraction as well for its natural resources. Hayden’s enthusiastic support and his use of Moran’s paintings and prints and photographs by William Henry Jackson helped persuade Congress that Yellowstone was indeed a national treasure, and President Ulysses S. Grant established Yellowstone as the first National Park on March 1, 1872. Although the park’s origins were laid on commercial foundations, more than 150 years later Yellowstone remains an internationally admired centerpiece of our National Park system. 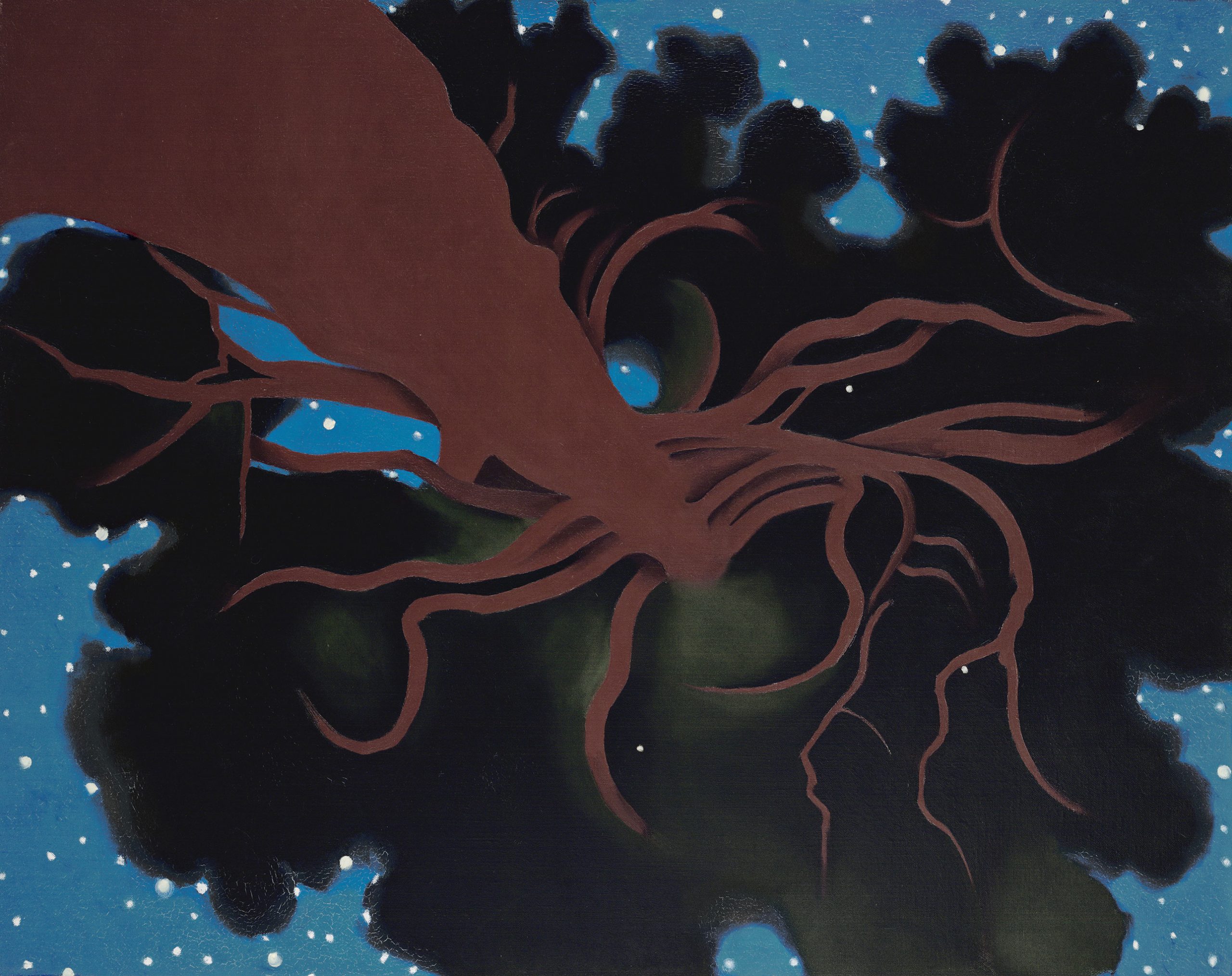 Modernism encompassed ways of seeing that expressed the breakdown of traditional hierarchies of thought, including those between nature and culture and human and nonhuman life. By questioning established orders of composition and subject matter, modernism led to a wider, more democratic range of artistic possibilities. Beginning in the early twentieth century and continuing today, many artists have addressed the human role in nature as an issue of urgent practical, ethical, and aesthetic concern and embraced an expansive sensibility extending beyond our own species. Georgia O’Keeffe’s The Lawrence Tree pulsates with vibrant energy and warmth, and the tree itself is imbued with a distinctive individuality. The painting, an homage to the British author D. H. Lawrence, depicts a ponderosa pine at Lawrence’s former ranch in Taos, New Mexico, and evokes the author’s appreciation for the vitality and inherent significance of nonhuman life forms. During this era, artists inventively seized the opportunities for visual representation posed by ecological problems of unprecedented scope, from the Dust Bowl and two world wars to nuclear radiation, chemical pollution, and now climate change—the effects of which have been unequally distributed among different peoples and places. At the same time, art itself has become ever more varied in its techniques, media, and range of vision, opening itself up to a world of identities, sensibilities, and creative forms. 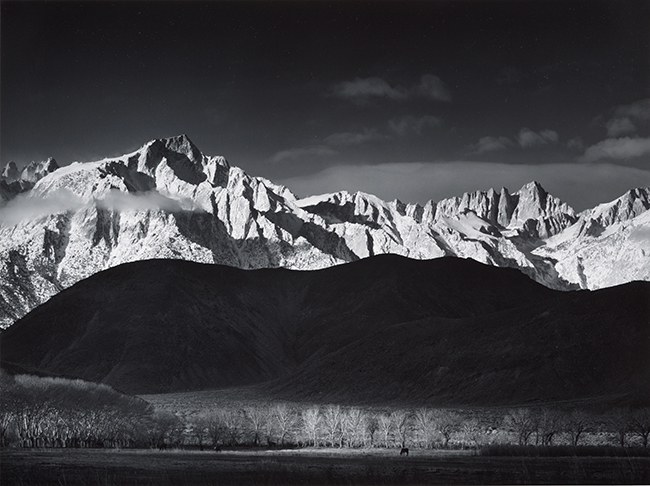 Few American artists are as universally beloved as Ansel Adams. His photographs of the Sierra Nevada and Yosemite National Parks were mainstays of the environmental movement of the 1960s and 1970s, celebrating the grandeur of the American landscape to inspire public support for the preservation of wilderness. But it is often overlooked that many of Adams’s most recognized images were made during an earlier time of national crisis, at the height of the Second World War. Winter Sunrise, the Sierra Nevada from Lone Pine, California, finds a horse grazing beneath the spires of Mount Whitney, the tallest peak in the continental United States. Lyrical and majestic, Winter Sunrise was first published not in a coffee table book but in Born Free and Equal, Adams’s 1944 volume documenting the Manzanar War Relocation Center. Its original caption read, “In the shadow of these mountains, the loyal people of Manzanar await their destiny.” Not simply a crisp winter morning along the great flank of the eastern Sierra, his image issued pointed admonition. Adams’s friend Wallace Stegner, the renowned novelist, essayist, scholar, and ardent defender of public lands, wrote what are arguably the most aspirational words written in the West: “This is the native home of hope. When it fully learns that cooperation, not rugged individualism, is the pattern that most characterizes and preserves it, then it will have achieved itself and outlived its origins. Then it has a chance to create a society to match its scenery.” 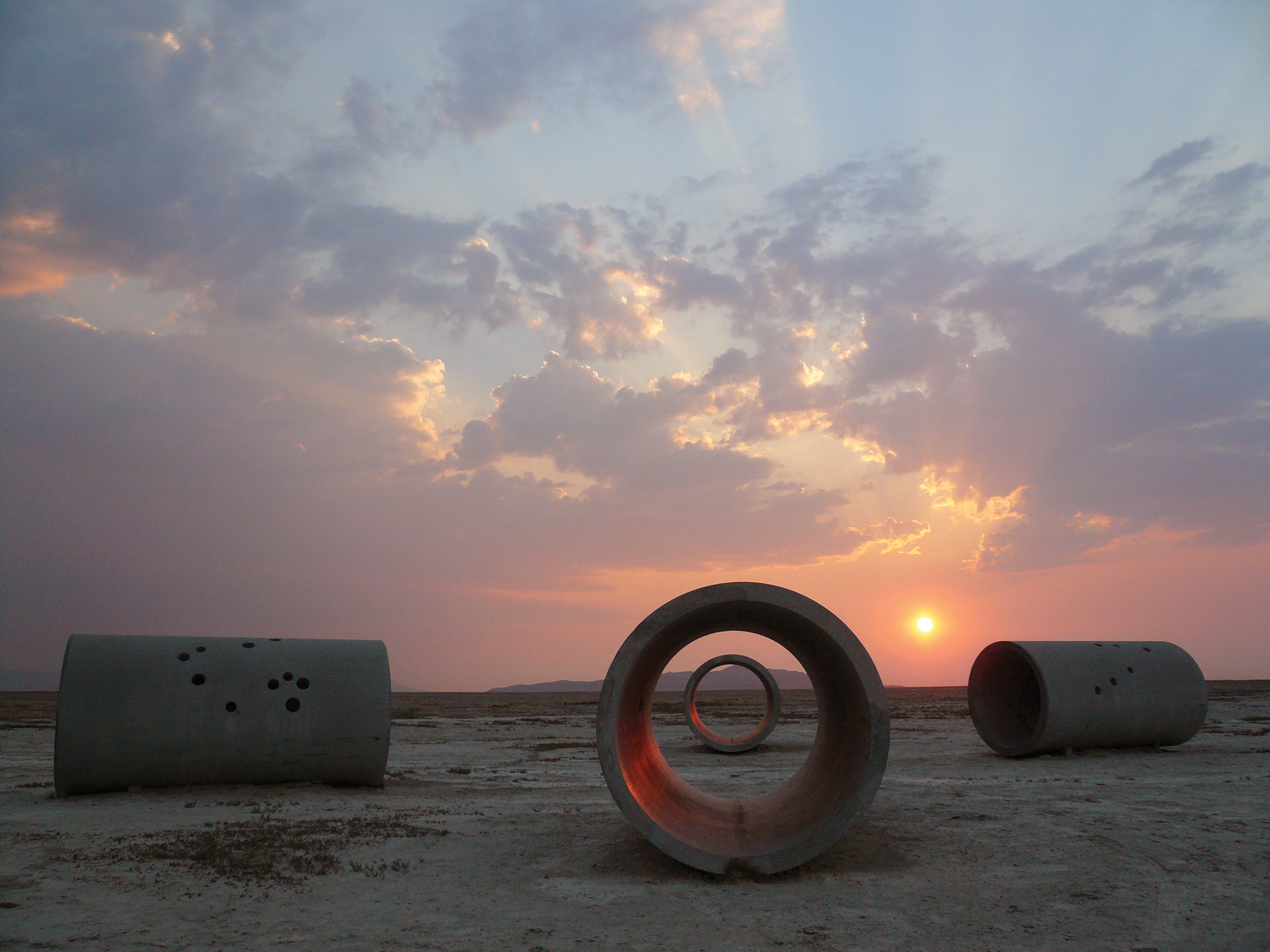 The outdoors meant a lot to Nancy Holt. She was raised in New Jersey, studied in Massachusetts, and lived in New York City, with little experience, if any, of camping and hiking until she married artist Robert Smithson and discovered New Jersey’s clay pits and Pine Barrens. But once she saw the American West for the first time, she said she felt as if she had come home. She made her first conceptual works: buried poems in isolated western sites. After Smithson’s death, she created her magisterial Sun Tunnels, isolated in northwest Utah. Holt’s work is classified as Land Art, but it was actually more concerned with reaching toward the sky, the cosmos. Her obsession was with the movements of the earth, the solstices, a sense of time removed from everyday civilization that had much in common with many ancient global cultures.

Nancy and I often hiked together after we both moved to the tiny village of Galisteo in New Mexico. She wasn’t an athletic walker. She took her time, marveling at whatever was around us. Once we went to the Bosque del Apache, hiding in the bushes around 5 a.m. to see the cranes rise, watching a coyote stalking the birds. Holt’s most political environmental piece was her 1986 installation, Pipeline. Having been invited to Alaska to celebrate the landscape, this was what impressed her. The indoor/outdoor sculpture yielded a puddle of oil on the gallery floor. 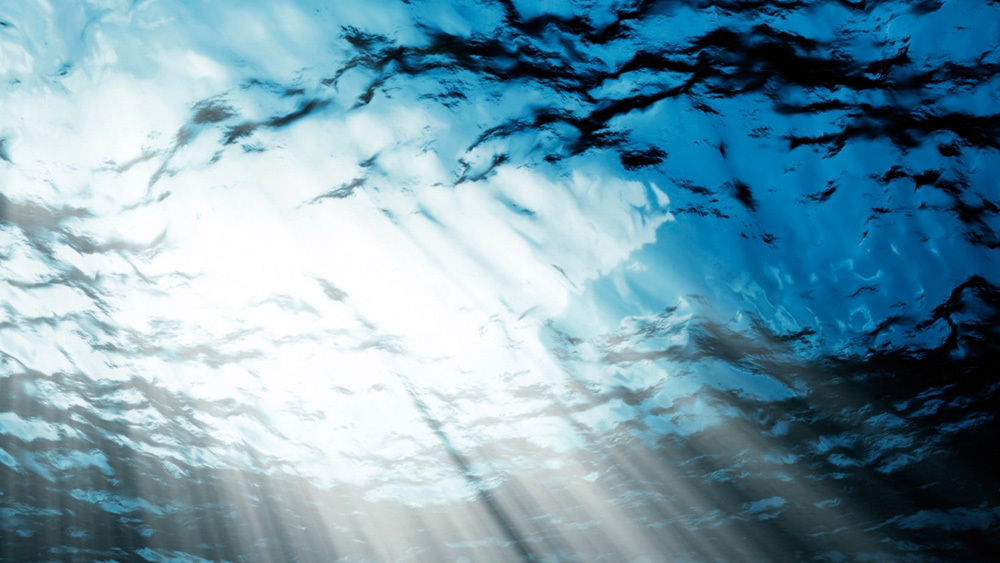 I wrote Become Ocean in 2013. It is a meditation on the deep and mysterious tides of existence. Life on Earth first emerged from the sea. And as the polar ice melts and sea levels rise, we humans find ourselves facing the prospect that once again we may literally become ocean. As an artist, my primary responsibility is to my art as art. And yet, it’s impossible for me to regard my life as a composer as separate from my life as a thinking human being and a citizen of the Earth. Although it begins in solitude, my work is completed in community. The music doesn’t come fully to life until other people—performing musicians, listeners, recording engineers, critics, and so many others—receive it and make it their own. . . . Neither divine intervention nor artificial intelligence will save us from the catastrophes that seem to lie ahead. To find that salvation, we must find our rightful place in the larger-than-human world—the world that encompasses great human cities and vast mountain ranges, the Mass in B minor and the song of the hermit thrush, the Sistine Chapel and the aurora borealis—this miraculously beautiful world that is our one true home. If my music can inspire people to listen more deeply to this miraculous world we inhabit, then I will have done what I can as a composer to help us navigate this perilous era of our own creation.

Originally published in The Guardian,“I want my art to matter. I want it to be of use”: https://www.theguardian.com/music/2018/oct/30/john-luther-adams-composer-become-ocean