To put your hands in a river is to feel the chords that bind the earth together.
Barry Holstun Lopez, 1945–2020 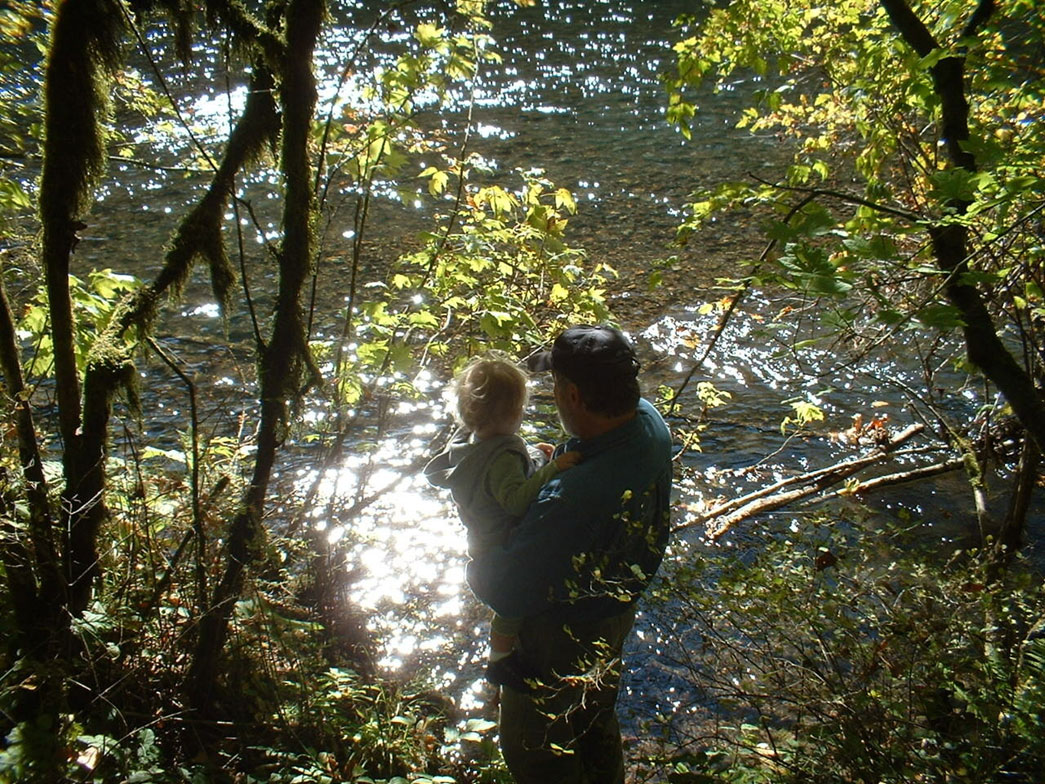 Barry Lopez with his grandson Owen, watching salmon spawning on their redds in front of Barry and Debra’s home in 2004. Photograph by Debra Gwartney.

Granta, Fire and Ice, by Debra Gwartney, 2021
“Barry had been ill for a long time, but his death swooped down on us like a hawk, talons first. Startlingly fast. Everything that gave me stability and safety – our long marriage, our house, the surrounding woods, the river – was unreachable now.”

Harper’s Magazine, The Story He Will Never Write: Remembering Barry Lopez, by John Luther Adams, 2021
“Barry Lopez devoted his life to the gift of stories. With fierce intellect and deep compassion, in luminous prose, he gave us stories of wolves and men, of traveling with and learning from indigenous people, stories of narwhals, polar bears, and vanishing sea ice, stories of the larger, older world that, in our dangerously alienated culture, we call ‘nature.’”

Notre Dame Magazine, An Unbroken Grace, by Fred Bahnson, 2021
“Barry Lopez was internationally acclaimed as one of the foremost nature writers of our time, but his vision encompassed all of humanity and the planet he knew as a sacred home.”

Oregon Humanities Podcast, In Memory of Barry Lopez, 2021
“Barry was an author and essayist known for documenting his travels to remote places and for his attention to the landscapes and people he encountered wherever he was. Barry’s writing career spanned over half a century, taking him to all corners of the earth, where he explored the relationship between justice and the natural world.”

Orion, Now That It’s Come to This: On Barry Lopez, by John Freeman, 2021
“Arctic Dreams, his 1986 National Book Award winner, is saturated in the ways of knowing that region of the world—reminding us that imagination enters when there is a gap between knowing and not knowing. This gap exists constantly in Lopez’s work; it’s where wonder emerges. It’s where hope exists.”

Outside, Remembering My Friend Barry Lopez, by Bob Shacochis, 2021
“It was never only his writing that attracted people to him—it was his radiant humanity, his true respect for others, especially those who could teach him what he most wanted to know: How do we live together, not just with each other, but with the earth? I don’t think I’ve ever personally known a man or woman who was so loved by so many.”

Patagonia, In Memory of Barry Lopez, by Malcolm Johnson, 2021
“For Lopez, who put so much stake in an intimate connection with nature, his concern for the future of the natural world wasn’t just philosophical. He saw and experienced the damage done to once-healthy ecosystems, and this past September, as unprecedented wildfires swept across the American West, the Holiday Farm Fire burned along the McKenzie and into his own property, taking an outbuilding where many of his letters, notes and manuscripts were stored. ‘The land around us as far as we can see,’ he wrote, ‘looks flayed.’”

Terrian.org, His Life Helped: In Memory of Barry Lopez, 1945 – 2020, by Kurt Caswell, 2021
“Barry was forever searching for a way to better understand and articulate why he did what he did. Over lunch one day, Barry and I were talking casually about this and that, when he said, “I have a question for you, Caswell. Why do we write?” I thought that he was testing me, and I conjured a list of reasons: to communicate, to document our time in history, to inform and help, because it feels good, and on and on. Barry gave me a pained look, and said: “Yeah, I don’t know either, and I’ve been asking myself that question for over 40 years.”

Literary Hub, Barry Lopez, Whose Landmark Writings Bore Witness to the Natural World, Has Died at 75, by Corinne Segal, 2020
”Over the course of half a century, Lopez’s work transformed the field of environmental writing, opening new worlds of narrative possibility; his style, which honored humans’ spiritual and intuitive connections to land while drawing on the scholarly work of scientists, historians, and philosophers, has become a guiding light for other writers now tasked with addressing a growing climate crisis.”

The Los Angeles Times, Appreciation: What Writers Learned from Barry Lopez While Moon-gazing at a Dairy Queen, by Pam Houston, 2020
“We are pattern makers,” Barry Lopez said, “and if our patterns are beautiful and full of grace, they will be able to bring a person for whom the world has become broken and disorganized up off his knees and back to life.”

The New York Times, Barry Lopez, Lyrical Writer Who Was Likened to Thoreau, Dies at 75, by Robert D. McFadden, 2020
“In a half-century of travel to 80 countries that generated nearly a score of nonfiction and fiction works, including volumes of essays and short stories, Mr. Lopez embraced landscapes and literature with humanitarian, environmental and spiritual sensibilities that some critics likened to those of Thoreau and John Muir.”

NPR: All Things Considered, Barry Lopez, Acclaimed Author and Traveler Beyond Many Horizons, Dies At 75, by Dave Blanchard, 2020
“National Book Award winner Barry Lopez was famous for chronicling his travels to remote places and the landscapes he found there. But his writings weren’t simply accounts of his journeys — they were reminders of how precious life on earth is, and of our responsibility to care for it.”

Orion, Thank You, Barry Lopez, by the Orion Staff, 2020
“His thinking on landscape and depiction have broadly influenced environmentalism and environmental literature in indelible ways for nearly fifty years. In his guidance of Orion, Barry was steadfast in his belief that love for humanity—despite our mind-numbing capacity for destruction—is inextricable from love for nature.”

The Salt Lake City Tribune, The Passing Wisdom of Barry Lopez, by Robert A. Rees, 2020
“Barry was not just a gifted writer, he was also someone who exemplified those virtues William Faulkner described in his Nobel acceptance speech as ‘eternal verities’ — ‘the old verities and truths of the heart … love and honor and pity and pride and compassion and sacrifice.’ More than this, Lopez’s was one of the most intelligent, informed and urgent voices over the past 40 years calling us to repent of our destruction and devastation of the earth, an impassioned, poetic plea for us to come to our senses.”

The Washington Post, Barry Lopez, Award-winning Writer who Ventured into the Arctic, Dies at 75, by Emily Langer, 2020
“‘Even though I appear to write largely about other landscapes and animals,’ he said in 1986 when he received the National Book Award for nonfiction, ‘what is in my gut as a writer is a concern with the fate of the country I live in and the dignity and morality of the people I live with.'”