[Santa Fe, NM] Established in the Fall of 2020, the Barry Lopez Foundation for Art & Environment works with contemporary artists to organize exhibitions addressing climate change, biodiversity, habitat loss, and our changing relationship with the land in a time of environmental crisis.

At this critical moment in our history, art can offer more than a requiem for what has been lost. Facilitating partnerships between artists, scientists, naturalists, and writers, the Barry Lopez Foundation fosters public engagement about the climate crisis through exhibitions inspired by the same urgency and affection for the land that informed Lopez’s writing. Although it has become necessary to imagine a very different future than the one we had hoped for, the Barry Lopez Foundation believes art can help us navigate the overwhelming decisions we are being asked to make about our fate and sustain our connection to the natural world.

Collaborating with photographers, painters, printmakers, and installation and new media artists, the Barry Lopez Foundation circulates its projects free of charge to reach a wide range of audiences beyond those served by traditional exhibition models. Organizing two new exhibitions annually, the Foundation will make each available to as many as six venues. In most instances, participating institutions are responsible only for the cost of transporta- tion and insurance. In addition to art museums and galleries, exhibitions can be adapted to natural history and science museums and other public venues. By forgoing a dedicated exhibition space, the Barry Lopez Foundation’s flexible, access-oriented structure allows for a diversity of communities to engage with recent work by nationally recognized artists.

The Barry Lopez Foundation for Art & Environment’s inaugural exhibitions, Ron Jude: 12 Hz and Janet Biggs: Imagination and Desire in a Northern Landscape, are available to travel to museums and galleries throughout the United States free of charge beginning this fall.

For additional information on both exhibitions, see www.barrylopezfoundation.org/exhibitions 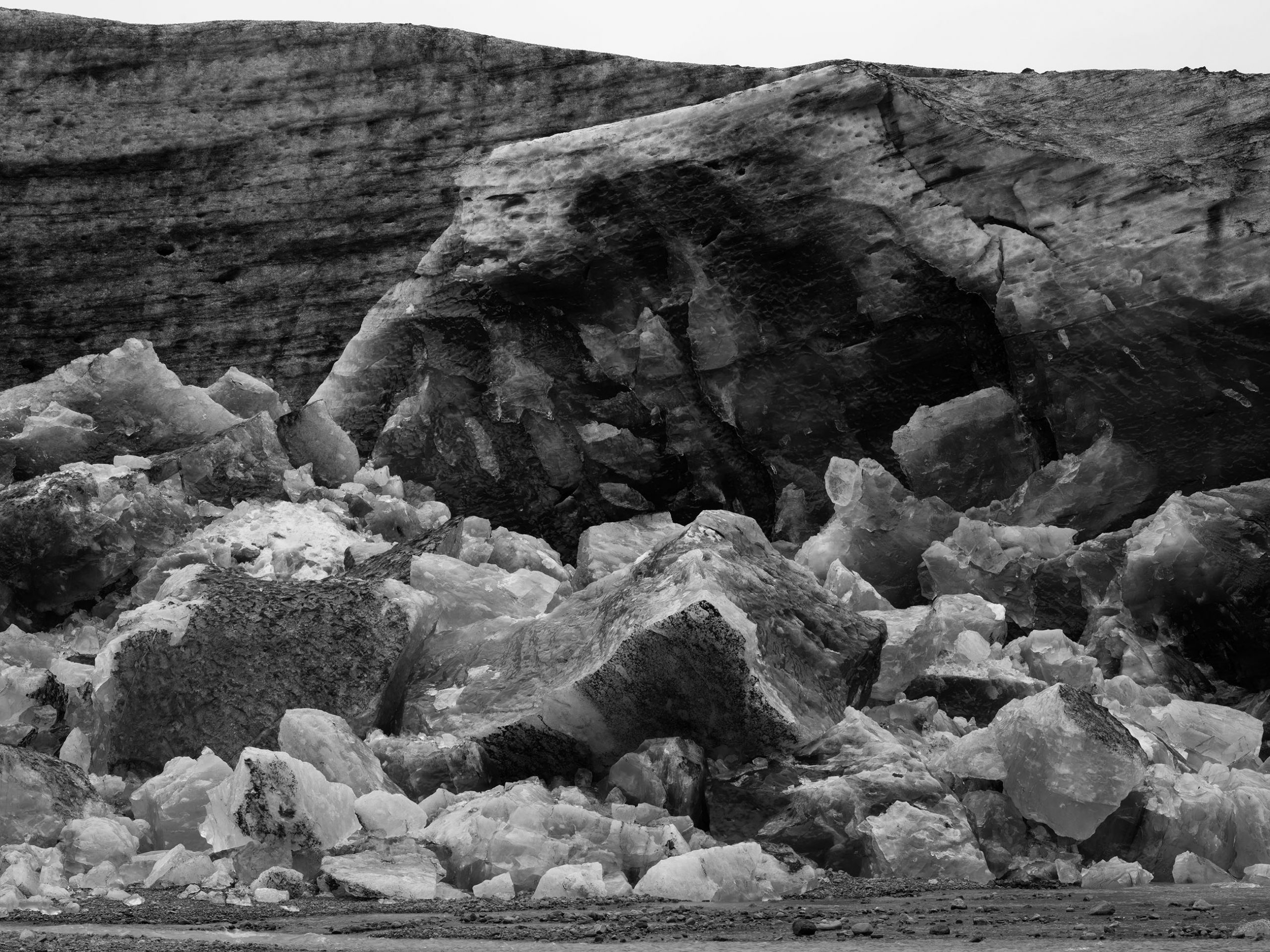 Ron Jude: 12 Hz references the limits of human perception—12 Hz marks the lowest threshold of human hearing, suggesting the powerful yet frequently imperceptible forces that shape the physical world, from plate tectonics to glacial erosion to the incomprehensi- bility of geological time. Made in Oregon, Hawaii, and Iceland, Jude’s imposing, large-scale black-and-white photographs describe the raw materials of the planet and its systems—lava flows, sculptural formations of welded tuff, river and tidal currents, and glacial valleys—that are the foundation of organic life. Stripped bare of our presence, they allude to the immense scale and veiled mechanics of phenomena that operate indifferent to human enterprise in a time of ecological and political crisis.

12 Hz establishes a simple premise: that change is constant, whether we are able to perceive it or not. In abandoning notions of sentiment and beauty found in traditional landscape photo- graphy, Ron Jude has created one of the most forceful and challenging visual statements of the emergent century.

Opening at the Jordan Schnitzer Museum of Art, University of Oregon, Eugene, on November 20, 2021, Ron Jude: 12 Hz will be available April 2022 to five additional venues through 2023. 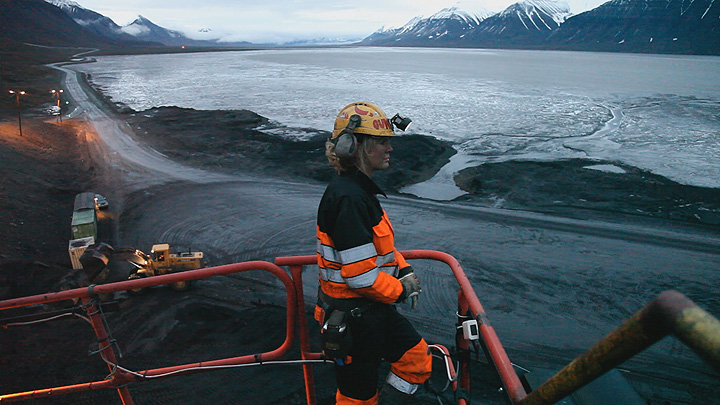 Janet Biggs: Imagination and Desire in a Northern Landscape brings together two videos the artist made above the Arctic Circle—Warning Shot and Brightness All Around. Biggs’s work is a clarion call for a heroic landscape, one that will be completely transformed within our lifetimes. The Arctic was once seen as indifferent to human enterprise, so vast and inhospitable as to be immune to any imposition, but climate change is projected to leave Arctic summers ice-free within thirty years.
Warning Shot, 2016, is an alarm and an elegy. Filmed on Svalbard, a Norwegian archipelago halfway between Europe and the North Pole, it memorializes a simple, performative act in a vast landscape with few witnesses. Elegant, somber, and heartbreaking, Warning Shot also allows for hope, bearing witness to what will be lost and inviting us to consider what, if any, action can be taken.

Brightness All Around, 2011, was also filmed on Svalbard, at the Sveagruva coal mine. Biggs’s video focuses on Linda Norberg, a coal miner working in inaccessible and dangerous surroundings, intercut with a vocal performance by New York music guru Bill Coleman. His presence is every bit as unsettling as that of the Sveagruva mine, a jarring imposition that shatters the mythology of an uninhabited Arctic and reminds us that even thousands of miles away, our footprint sits heavily upon the land.

Janet Biggs: Imagination and Desire in a Northern Landscape is available to six venues beginning September 2021 through 2023. 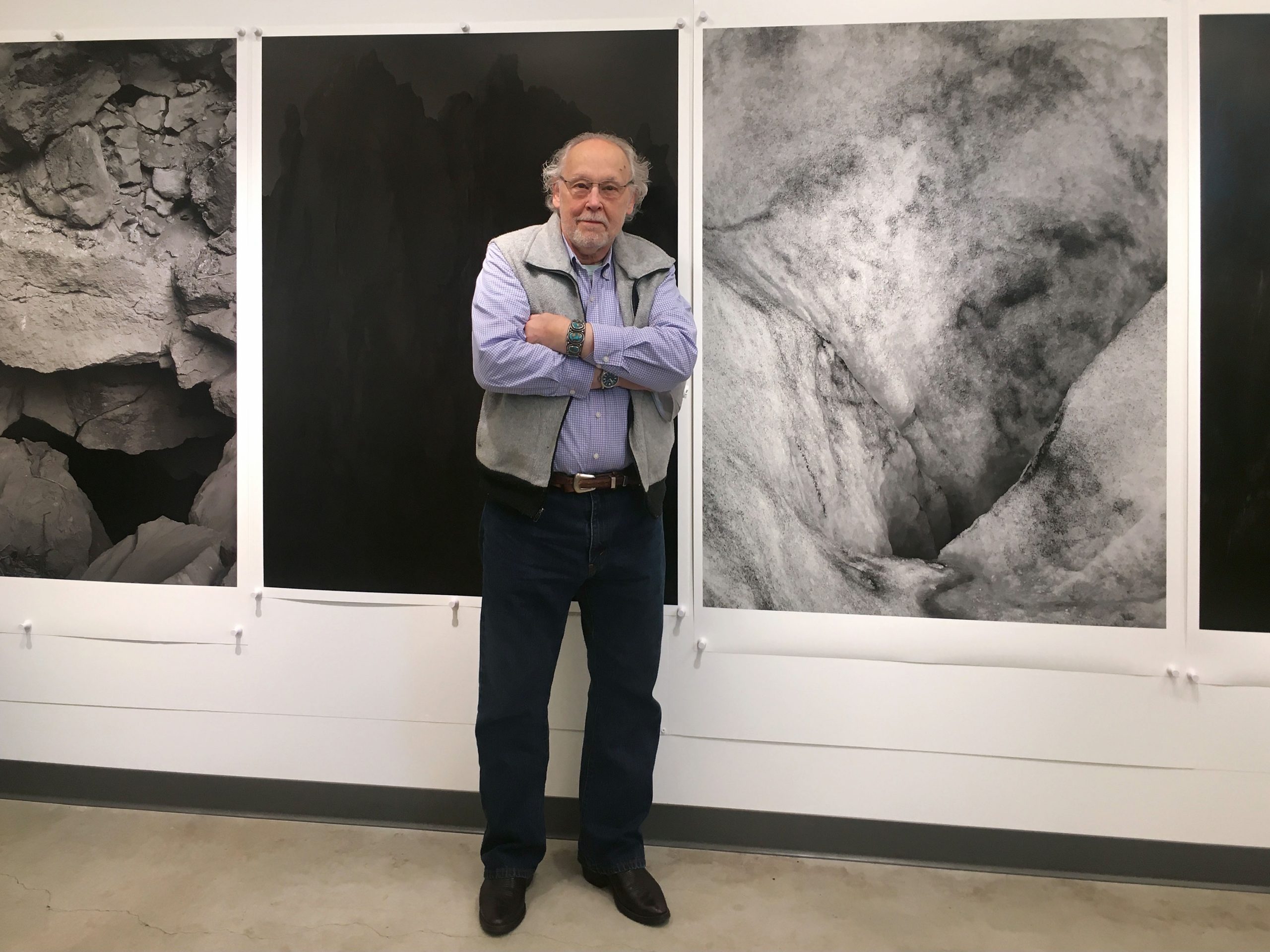 Barry Lopez, the National Book Award-winning author of Arctic Dreams, championed a “community of artists”—friends and colleagues including fellow writers as well as photographers, painters, sculptors, and musicians—whose work shared a common goal: to help. Before his passing in December 2020, Lopez was active in establishing the foundation that bears his name. Believing that the arts could illuminate the challenges of the climate crisis in a thoughtful and accessible manner, he wanted to engage the most urgent dialogue of the twenty-first century through the work of insightful and compassionate artists whose concerns resonate with our shared past and our hopes for the future. At the inaugural meeting of the foundation’s board in October 2020, Lopez expressed his conviction that it is time for writers and artists to no longer be the warm-up band for serious discussions about our future and the future of the planet.

Debra Gwartney, Barry Lopez’s wife, said, “Barry was enthusiastic and deeply honored about the foundation’s ideas and its mission. It made his last months richer and confirmed his legacy in ways that meant a lot to him.”

Hugh M. Davies, the Barry Lopez Foundation’s board chair, added, “It is with a sense of admiration for Barry Lopez and his remarkable career and a commitment to contempo- rary art’s unique capacity to engage people with challenging issues that we lanched the foundation. We look forward to reaching audiences throughout the country with compelling work that addresses one of the most important messages of our time.”

Born in 1945 in Port Chester, NY, Barry Lopez lived along the McKenzie River in Oregon from 1968 until his passing in 2020. In addition to Arctic Dreams: Imagination and Desire in a Northern Landscape, he was the author of Of Wolves and Men; eight works of fiction; and two volumes of collected essays, Crossing Open Ground and About This Life. His most recent book, Horizon, was published in 2019. Lopez was a recipient of the Award in Literature from the American Academy of Arts and Letters; the John Hay Award; Guggenheim, Lannan, and National Science Foundation fellowships; Pushcart Prizes in fiction and nonfiction; and honors from the Association of American Geographers, the New York Public Library, and the Nature Conservancy, in addition to numerous other awards. In 2002, he was elected a Fellow of The Explorers Club.

For more information on the Barry Lopez Foundation for Art & Environment and our traveling exhibition program or for press images, please contact: